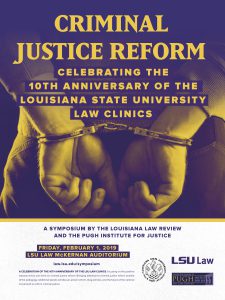 2019 marks the 10th Anniversary of the law clinics at Louisiana State University. The clinics have had a substantial impact on the Law Center as well as reform of the legal system in Louisiana. The clinical programs at LSU provide students with a hands on experience that allows them to interact with clients, provide services to those who may not be able to afford it, and most importantly make a positive impact in the community. The focus of this symposium will address criminal justice reform in general and the influence that legal pedagogy can have on the reform of the criminal justice system.

Panel 1: Clinical Education/Pedagogy and the Impact on Criminal Justice Reform

Complete Index of Volume 75, Issue 2 – The Rest of the Story: Resolving the Cases Remanded by the MDL

Because remand occurs so infrequently, few courts or scholars have addressed the topic. This Article thus aims to ignite that discussion by explaining the potential advantages of remand, arguing that remand’s scarcity is caused by repeat players’ uniform interest in settlement and suggesting key junctures for both transferee judges and the Panel to disaggregate cases.

Using a variety of data sources, this Article systematically examines the universe of MDL cases—centralized and noncentralized—with a special emphasis on these two groups of disaggregated cases. Part I provides a brief overview of the MDL process. Part II then provides a systematic analysis of the centralization of MDL cases, with a special focus in Part III on cases that are non-centralized. Somewhat surprisingly, many noncentralized cases do eventually end up transferred to another district, either to another MDL proceeding or to another federal venue under 28 U.S.C. §1404(a). Part IV provides an analysis of the termination of centralized MDL cases—most of which terminate in the transferee court—and Part V documents what happens to section 1407 remand cases when they return to the transferor court. We find that few section 1407 remand cases are actually tried post-remand; most settle.

When Remand is Appropriate in Multidistrict Litigation

The 1968 Multidistrict Litigation Act (the “MDL Act”) created the Panel on Multidistrict Litigation (the “Panel”) to transfer multiple cases with “common questions of fact” to a single federal judge for coordinated or consolidated pretrial proceedings. Transfer is authorized if the Panel determines that “transfers for such proceedings will be for the convenience of parties and witnesses and will promote the just and efficient conduct of such actions.” The transfer to a single district court is made without consideration of personal jurisdiction over the parties and without having to meet federal venue requirements.The transferee court has broad authority to dispose of all motions and issues that arise in the pretrial context, including all discovery matters and dispositive motions such as those for dismissal and summary judgment. The Act provides that: “Each action so transferred shall be remanded by the panel at or before the conclusion of such pretrial proceedings to the district from which it was transferred unless it shall have been previously terminated . . . .” No guidelines are provided for determining when “the conclusion” of the proceedings occurs, and now, after almost fifty years of practice under the Act, significant issues remain as to when remand should take place.

Difficulties with Sharing: A Proposal to Define the Voluntary Unit and Protect the Rights of Surface Co-Owners and Mineral Servitude Holders in Louisiana

This Comment proposes a solution to the pressing question of whether a surface co-owner can be burdened by a voluntary unitization to which he or she did not consent. Part I gives a brief explanation of how mineral rights are formed in Louisiana, the nature of the mineral servitude, co-ownership principles, and unit formation. Part II explores three potential remedies derived from existing law that a court may apply to the issue presented. Part III proposes two revisions to the Mineral Code—clear definitions of the voluntary unit and its effects. If adopted, these modest clarifications of existing law would ensure the ideal outcome to the current issue: a solution that provides an equitable remedy for surface co-owners, mineral servitude holders, and oil and gas operators alike.

Testamentary Formalism in Louisiana: Curing Notarial Will Defects Through a Likelihood-of-Fraud Analysis

To better enforce testamentary intent and provide guidance to courts, practitioners, and Louisiana citizens, this Comment argues that Louisiana courts should apply the Guezuraga test as articulated—a court should validate a will unless there is a likelihood of fraud or undue influence. Under this standard, courts must determine on a case-by-case, contextual basis whether the deviations in formality reflect the probability of fraud. This doctrine would provide fairness to potential legatees, while remaining faithful to testamentary intent. Moreover, a consistent standard would provide a more simplified process for courts and practitioners.

A Gunman’s Paradise: How Louisiana Shields Concealed Handgun Permit Holders While Targeting Free Speech and Why Other States Should Avoid the Same Misfire

During the 2013 Legislative Session, the Louisiana Legislature amended its concealed handgun statute, Louisiana Revised Statutes section 40:1379.3, to include section 40:1379.3(A)(3).The amendment makes it unlawful for “any person” to “intentionally release, disseminate, or make public in any manner any information contained in an application for a concealed handgun permit or any information regarding the identity of any person who applied for or received a concealed handgun permit.” The law, referred to in this Comment as “Louisiana’s Ban on Gun Permit Speech,” penalizes violators with a potential $10,000 fine and imprisonment of up to six months. Since its passage, legislators in other states have considered enacting laws similar to Louisiana’s, and this trend of criminalizing speech on gun permits will likely continue.

The Legislature must act more effectively to protect Louisiana’s environment. To that end, Part I of this Note provides background information on legacy litigation in Louisiana. In addition, Part I describes Louisiana’s current law of damages in detail, revealing the shortcomings of section 30:29 and the Louisiana Supreme Court’s various interpretations of the statute. Part II explores the Court’s most recent interpretation of the statute in State v. Louisiana Land & Exploration Co., discussing the facts, implications, and ensuing confusion of the decision. Part III analyzes Louisiana Land and its interpretations of section 30:29, parsing through its ambiguous language and stated legislative purpose. Finally, Part IV advocates that the Legislature revise the statute to more accurately reflect its original intent by explicitly recognizing that remediation damages in excess of DNR’s determination may be recovered, even in the absence of an express contractual provision providing for remediation damages.